For the next two weeks MarineGEO is kicking off its newest site at the Hawai’i Institute of Marine Biology (HIMB) in Kāneʻohe Bay with a massive biodiversity inventory effort called Ola I ke kai (Life Emanates from the Sea). Over 90 researchers from  a dozen organizations including: University of Hawai’i, The Nature Conservancy, The US Forest Service, and several research units of the Smithsonian, are converging to conduct comprehensive surveys of fish, invertebrates, and algae in the bay. 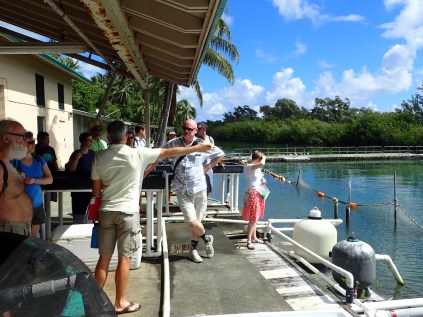 Researcher receive an orientation to the HIMB research station.

Fun fact: Coconut Island (where HIMB is located), is shown in the opening credits of the TV show “Gilligan’s Island” as the setting of the popular program.

The community performs welcome and blessing rituals to begin the Ola I ke kai biodiversity survey.

Kāneʻohe Bay has supported agriculture and aquaculture for the last thousand years, and as such, it presents a unique opportunity to study the impact of long-term human activity on biodiversity. In addition, the recent designation of a National Estuarine Research Reserve (NERRS) to the area has created a unique opportunity for the local community to implement indigenous management practices to restore the vitality and resilience of the ecosystem. MarineGEO will contribute to this effort by measuring a baseline of biodiversity in the bay, and track it through time as the traditional management practices are implemented.

I’ll be posting from the event as it happens here and on Twitter. Participants will be posting with the tag #MarineGEOHI.

We are looking forward to a productive and exciting week. Stay tuned!