An ARMS Load Of Critters

It’s the last week of MarineGEO-Hakai joint operations, and the creature tally is through the roof (1000+ at last count). Teams from the Smithsonian, Hakai Institute, and countless universities and field stations have gathered at Calvert Island on the British Columbia Central Coast to do something that’s never been done here before: identify as many marine species as they possibly can in three weeks. It’s called a ‘BioBlitz’, and it’s filling in all the missing gaps on our species lists from the tiniest amphipod to the largest ling cod (check out Hakai’s BioBlitz great “pump up” video here.) 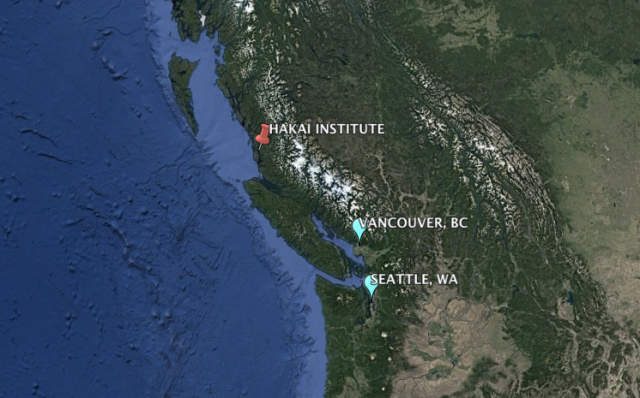 The Hakai Institute is located about 400km (250mi) north of Vancouver, BC on the central coast of British Columbia. Half-way between the continental US and Alaska, it sits right at the coastal edge of Canada’s beautiful Great Bear Rainforest.

I’m here for two reasons: to conduct visual fish surveys using the Reef Life Survey method, which has been used on a global scale to quantify fish abundance and diversity; and to help process the ARMS. What are ARMS? Well, ‘ARMS’ stands for Autonomous Reef Monitoring Structures, and they’re basically like a layered-cake of PVC plates that we deploy in rock or coral reef environments. We let them soak for a year or two, then collect them to identify and count all the critters that have colonized its surface. This includes things like bryozoans (a kind of underwater “moss-animal”), tunicates (sea squirts), and barnacles, that use the ARMS as a substrate to settle and attach to. It also includes all the tiny mobile organisms that use the spaces between the plates of the ARMS for shelter like tiny crabs, sea spiders, and worms. It’s a great method for getting a snapshot of community diversity in a standardized way. 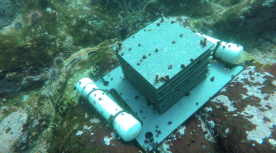 An ARMS in situ at Rattenbury Island near Hakai. (photo: Derek VanMaanen) 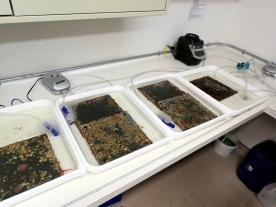 A parade of disassembled ARMS plates wait patiently to be processed. 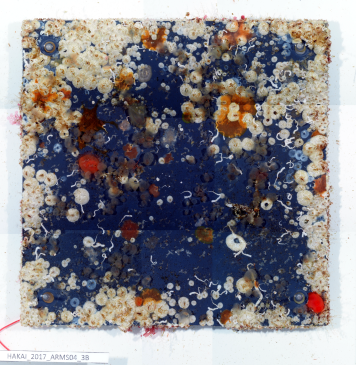 The ARMS here at Hakai were deployed in three types of habitats: bull kelp forest, giant kelp forest, and bare rock (also called ‘urchin barrens’ because all the seaweed has been eaten by voracious grazing sea urchins.) They’ve been soaking for just about a year, and the results are truly spectacular. I had my doubts that we would see very much on the plates because typically one year isn’t considered enough time to really get a good diversity of critters, particularly in cold-water environments like British Columbia. Luckily, I was grossly mistaken. A strong Spring-pulse of settlement this year brought an amazing abundance of organisms to the plates and each retrieval reveals a treasure trove of marine diversity. The ARMS processing team should finish with all 12 of the retrieved ARMS later this week (four replicates of each habitat type.) After that it’s just a matter of collating all the data and waiting for the taxonomists to identify some of the more unusual specimens. Already we’ve seen hundreds of species from dozens of phyla, perhaps we’ll even have some undescribed species in the mix! For a great pictorial overview of some of the creatures we’ve been collecting, you can find a smattering of pictures by searching #MarineGEOBC on Twitter.

A sampling of the diversity we are finding at Hakai.

But ARMS are only a part of what’s happening at Hakai. We are also doing direct SCUBA collections of critters in the field to target particular groups of animals, and I have been conducting Reef Life Survey’s (RLS) with my dive buddy Dr. Aaron Galloway. We are pairing the RLS surveys with sites that have ARMS to get a sense of what the fish communities look like (ARMS don’t capture the large fish that school in the water column, though they do catch the occasional small goby or sculpin.) Over the past week we have surveyed eight sites and identified about 84 fish and mobile invertebrate species along our transects. It’s been a great chance to expand the species lists of RLS to include many of the common organisms that we find in the Northeast Pacific. But besides just counting the fish and inverts, we try to take pictures of every species we see to create ‘photo vouchers’ that can help us confirm our ID’s as well as identify species that are more cryptic (difficult to identify.) I’ve been using the new MarineGEO underwater camera setup and it’s really paying off.

Once the BioBlitz is over, the data that we collect via RLS will be joined with the biodiversity data from the ARMS and dive collections, and made widely available to anyone who wants it. It’s our hope that this effort will provide a new baseline of marine species diversity for the region that can be used as a starting place to ask important questions about how species diversity is modulated by climate change.